See what Deadlock fans are creating, whether it be fan games, art or scenarios.
Post Reply
11 posts

We already have a few buildings implemented for internal testing, for instance, all housing types, city center and farm. We already have building placement support, but some structural changes were made, which caused some delays.

We have decided to make more buildings available for OpenDeadlock Alpha 1, but it would be the best to have their documentation compiled.


Therefore, we are encouraging posts and wikis to put this information altogether.
If you know something about them or simply want to share here before it's compiled into the wikis, feel free to post.

And... If you needed a reason to contribute to the wikis, this is it.

We have the complete list of DL1 buildings here: viewtopic.php?p=889#p889

This is the list of buildings and their status:
Status meanings:
Confirmed: Accepted to be implemented for Alpha 1 version.
Not Confirmed: Documentation is accepted. They are not considered important for this version but they could be available.
Rejected: We have decided that they won't be available for the next version. Everyone is free to write about them but we will not use this anytime soon.

Cloning Center: not confirmed as it probably won't work for the first version.

Hospital: Rejected as there are no plagues, battles or morale effect.

Art Complex: Rejected as there is no morale effect and no black market to sell art.

Fuel Depot: Rejected as there is no aircraft.

Military Training Center: Rejected as there is no combat.

Bunker: Rejected as there is no combat.

City Center: Confirmed. (no culture as there is no morale)

Any sea platform building: rejected as there are no seas.

I have written about it before, there won't be battles for the next version. Therefore any military units except for colonizers and scouts would be useless.
Since there is no morale, taxation levels will be fixed as "low taxes" for Alpha 1.

What is needed:
We already have their costs here: viewtopic.php?p=889#p889
But it would be better to have pages for each building.
Important attributes: costs (including labor cost), required research, upkeep (energy or credits), maximum workers (colonists) per building, their upgrade type, size (in tiles), what they produce.
We do not know if they have some hit point information.

Thank you very much.
Best 20x20 Map is elected.
Follow @OpenDeadlock.
Please help Deadlock Wikis by documenting buildings.
Note: OpenDeadlock Knowledge Gathering has been updated. Translation and Build Tools might fail. Send me a PM if you need help.
Top

Tggtt wrote:We do not know if they have some hit point information.

Hit point information is in the appendices of the strategy guide if you need them (under toughness I think, I don't have the guide on hard).
Tarth cooks make best strudel, barbecue, bean dip, fish, cat food, smelt, piston rings, tofu and cam shafts...
Top

Actually we do not need hit points/toughness right now but they should be ready for completeness.

Possibly asked questions for members that are not part of the development team:

You still do not have this information?
We already do have most of it, thanks to decoding efforts and the guide book. Most of it is also visible when you use the building dialog to place a new building.
This means we are also going to work on documenting them.
We are encouraging compiling them into wiki because it's important to make it easier for everyone.
Also, It is not my current priority to have the buildings' attributes correctly defined, as I am currently working on features that are common to most buildings.
Therefore, documenting them is something that would help to make their attributes correct.

Why don't you make the buildings correct from start?
The buildings are moddable and the mod file format is not final yet. Every time I upgrade the format, it requires to verify all buildings again and again. So, I just use about 4 types of buildings for testing.
Best 20x20 Map is elected.
Follow @OpenDeadlock.
Please help Deadlock Wikis by documenting buildings.
Note: OpenDeadlock Knowledge Gathering has been updated. Translation and Build Tools might fail. Send me a PM if you need help.
Top

I'll create a specific template for buildings in Deadlock Wiki. I've seen that you compiled a list about building costs, that will make it easier for me, thank you!

Question, Deadlock II buldings have different attributes? I remember that units do, but I can't remember if buldings do.

Thank you!
Our Wiki: http://deadlock.wikia.com/wiki/Deadlock:_Gallius_IV

Grand Cherokee wrote:Question, Deadlock II buldings have different attributes? I remember that units do, but I can't remember if buldings do.

Yes, there are a few changes that I am not really worried about because they could be easily changed due to the modding capability of OpenDeadlock.

However, it is important to point the game version for each building when writing the wiki pages.
Since most attributes seem to be common, it is both possible to create pages for each game or to create a single page for each that presents both attributes. Feel free to choose the best option.

Deadlocks have a few buildings with different maximum workers (colonists) per building. I think the fusion power plant has this issue.
Also, only Deadlock 1 has Robotic factory, therefore, the "upgrades to" attribute of automated factory is different.
Best 20x20 Map is elected.
Follow @OpenDeadlock.
Please help Deadlock Wikis by documenting buildings.
Note: OpenDeadlock Knowledge Gathering has been updated. Translation and Build Tools might fail. Send me a PM if you need help.
Top

I'm thinking about creating a page for each game and then using a code to visualize both in a single page. It's quite simple, it works like this "I create Scout page, then I creat a second page named Scout/DII then I imput the code on the first page and then you just need to press a button to change between versions. It's in use in Warlords Battlecry Wiki, a great game by the way.

Man, I forgot about Fusion power plant, you're right, in Deadlock I we can place three colonists per building, but in Deadlock II the limit is four. Yeah, that Robotic factory, I liked that design, too bad it's not in DII.

Oh and the specific template for buildings is already working folks, check it out, in the next days I'll upload info.

Could you walk through an example of helping on the wiki?

Meaning, here's specific text for "farm", and here's the specific URL you follow to contribute that text for the "farm". As of right now I'm not sure where to contribute, nor what the general format of the text should be. I visited a few links from the original post, but didn't dive deeper.
Top

Sure! I just added some links to the "Help" navigation bar at our Wiki, check it out.

I advice you to create an account, you can have a name (Unregistered people don't have names, when they edit something only their IP appears), you can customize your profile by adding a pic, and you can choose your preferred mode of edition. In my case I prefer source editor, I can view and imput codes easily. But don't worry about it, it's not that technical. In doubt, check out how other pages are structured and copy their design. Right now buildings pages have the same design, so does the races pages.

For now, Tggtt and me, we are creating pages with that specific template and basic information. The focus is on Deadlock I info right now, for OpenDeadlock project. But you can of course edit whatever you want, if you want to you can add a detailed description for each page, it's pretty vague right now. You can view what we are doing on the navigation bar, on the tab "On the Wiki" and then on "Wiki Activity", from there you can access pretty much everything, or better yet, you can type the desired page on the search bar located at the upper tab, next to login options (Or your profile pic and settings, if you decide to create an account), if no results appear, it means there's no page about it yet.

But really, don't worry about commiting a mistake, when I joined Wikia (Now Fandom) I didn't know much about anything.

You can always see how your edit is going to look, if it looks good publish it, if not and you already published it, don't worry, there's an option to revert it, undo your edit to the last version. And by the way, there's no general format for the text right now, just don't write anything above the template info, write at the left side.

Thank you!
Our Wiki: http://deadlock.wikia.com/wiki/Deadlock:_Gallius_IV

Grand Cherokee wrote:Sure! I just added some links to the "Help" navigation bar at our Wiki, check it out.

Congratulations on becoming a colonist!

Be sure to sing the DEADSONG: "Son, be a colonist!"

MaugTheInfirm wrote:Meaning, here's specific text for "farm", and here's the specific URL you follow to contribute that text for the "farm".

Hello MaugTheInfirm, my top priority right now is to complete the "information box" of each building.
Cherokee (and I) has/have created most of pages, but they are not complete (yet).
They are all which are inside the category:
http://galliusiv.wikia.com/wiki/Category:Buildings
Just browse the category there and you will be fine!


After you click the edit button on each building page, you can still use the editor (not the source editor) to add values to the attributes shown there: 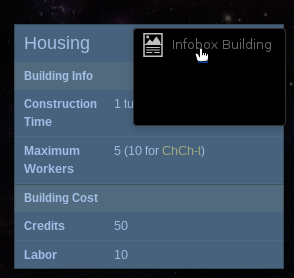 As I have told Grand Cherokee earlier, if you don't have the retail version of DL1 at hand, you can still download a DL1 demo version (any language) and then apply the 1.31 patch and it is going to be in English. It still runs as demo without CD, which is well enough to see every building.
Find demos and patches at the downloads page of Gallius IV. http://www.galliusiv.com/Gallius_IV/Downloads.html
Best 20x20 Map is elected.
Follow @OpenDeadlock.
Please help Deadlock Wikis by documenting buildings.
Note: OpenDeadlock Knowledge Gathering has been updated. Translation and Build Tools might fail. Send me a PM if you need help.
Top

Also, if you guys and gals need some help or want to chat, please join our chat:

If I'm around, I'll join the chat to help you with anything.
Our Wiki: http://deadlock.wikia.com/wiki/Deadlock:_Gallius_IV